The Marine Park of Tavolara – Punta Coda Cavallo became a reality at the end of 2001 and it covers a large area to preserve its endemic life and the precious eco-system. The environmental protections placed added important restrictions that helped re-populate the sea with its original inhabitants.

Tavolara Island is the largest island within this area. A limestone massif 6 kilometers long and 1 kilometer wide, with very scenic steep cliffs on all of the eastern coastline. Its highest point is 585 meters above sea level. Currently the island is inhabited by only a handful of families, and has a small cemetery and summer restaurants...

The nearest sizable town is Olbia, and the small fishing village of Porto San Paolo is directly across a small strait. The islands of Molara and Molarotto are nearby.

Most of the population of the island was displaced in 1962 when a radio-goniometric station was constructed on the western half of the island to support the ex-strategic NATO base of la Maddalena. The aerials from the station can be seen from quite a distance, and that portion of the island is restricted to military personnel.
It is said that Tavolara was one of the smallest kingdoms on the planet before the unification of Italy! The story goes that in 1836, King Charles Albert of Sardinia visited the island and acknowledged Paolo Bertoleoni as an independent sovereign monarch. When King Paolo I died in 1886 the island became a republic, but the monarchy was reinstated again in 1895. Since that time the island's kings have all come from the Bertoleoni family, recognized as the rules of Tavolara by the Kings of Sardinia. Documents dating to 1767 affirm that Tavolara had never been a part of the Kingdom of Sardinia. The present King Carlo II of Tavolara is an Italian citizen named Tonino Bertoleoni...!.

Bird rookeries exist on the island, in general a rarity in Italy due to heavy coastal development. The island is a perfect home to many wild birds such as eagles, hawks ... In the nearby laguna near San Teodoro a few kilometers south of Capo Coda Cavallo it is also possible to see the many colorful pink flamingos.

Most famous dive sites are around la Secca del Papa" which emerges with sharp peaks from its bottom at about 40 meters to 15 meters from the sea surface. However the southeast wall of Tavolara, with its softer calcareous geology is home to infinite biodiversity easy to dive and explore.

The marine environment is a fantastic display of red and yellow gorgonias, endemic life such as giant groupers (cernie), and blue fish like tunas, jacks, barracudas. The monk seal was seen here until 1991 and other special encounters are possible. Many dive sites are available and offer great video and photo opportunities...

On the small island of Molarotto lives a lizard, unique in its species and in the world, called Podarcis "tiliguerta ranzii" in its scientific name, which has a particular blue colouring different from its subspecies.

To get further details and information it is best to visit the official web site of the Marine Reserve.  It is a valuable source of general information as well as a list of the updated events in the area. The Park (AMP) has helped for safer and relaxed diving with the addition of over 20 buoys for easy entry and exits during dives! 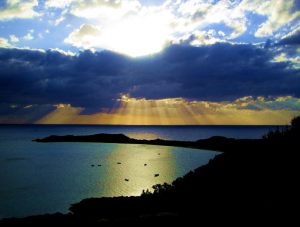 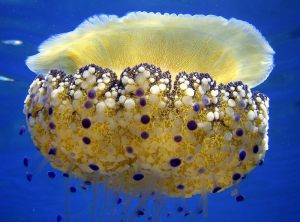 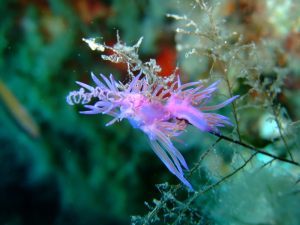